EXCLUSIVE: Gelnett Will Shows Funds May Not Have Been Used as Intended. Money Flows to DH&L Despite Cross Out. READ THE WILL

Funds from the mysterious Selinsgrove man who left the town his fortune may have been spent in ways he had not intended, according to a handwritten copy of his will obtained by the Orange Street News

Rudy Gelnett, who left $5.8 million to the town of Selinsgrove, originally wrote that he wanted to leave $300,000 to the Dauntless Hook and Ladder Fire, but then crossed it out of his will (SEE PIC ABOVE). It is unknown why Gelnett crossed it out. However, after his death, more of Gelnett’s money still ended up going to Dauntless Hook and Ladder Fire than any other cause, according to documents received by the Orange Street News.

The documents show that despite the crossout, $194,760,01 of his fortune ended up in the hands of fire company.

DH&L was recently in hot water after the OSN exclusively reported on how they broke several laws, much of which was revealed at a private meeting in February which the OSN was not allowed to attend. “Members found invoices that were marked as purchases for the race track,” the source tells the OSN. One firefighter “was observed putting fuel into gas cans and five gallon buckets, and even told the members that saw him, that he was taking it to the race track,” according to sources.

After the OSN reports, a report by Auditor General Eugene DePasquale was released and found that the fire company “did not comply with state laws, contracts, bylaws, and the receipt of state aid and the relief association funds,” from January 1, 2013- until December 31st 2016.

According to the report, the rule breaking include:

The trust annually gives out about $225,000 to various nonprofit organizations and agencies, including the Gelnett Memorial Library, Selinsgrove Community Pool, and parks and recreation.

In a statement to the OSN Williams said:

“Rudy may have learned that the Borough, eventual steward of the Trust, having the responsibility to provide Fire Protection would include the fire company in its giving.  You may have noticed that Rudy gave $300,000 to the library and may not have been aware that the steward of the Trust might include them in allocations from the Trust.  It is hard to say.  The Finance Committee of Borough Council have often referred to enhancing the lives of residents of the community and have taken it to heart.  What would Rudy do or what would Rudy desire to be done or how the Trust funds are spent?  The Borough Council has publicly decided what it is going to support based upon the requests for the proceeds of the Trust and the general guideline left my Rudy in his will.  I provided you with a spreadsheet of this information.  Another guideline used by the Borough Council is that the proceeds should not be used for Operating expenses.  I think the key is not to dissect what has been done, but to ask yourself, how have the lives of the residents of Selinsgrove been enhanced by the generosity of a man who liver very modestly.”

“The sole purpose of the Gelnett trust is to promote the health, education of the citizens of the borough of Selinsgrove by and through the distribution of the interest income for civic purposes. Thanks to the generosity of Francis “Rudy” Gelnett, the residents of the borough will benefit for generations to come.”

Gelnett was known as a mysterious man. He rode his bike around Selinsgrove, and few, if any, knew of his wealth until after his death.

SEE THE LIST OF GROUPS THAT GOT MONEY FROM THE FUND BELOW: 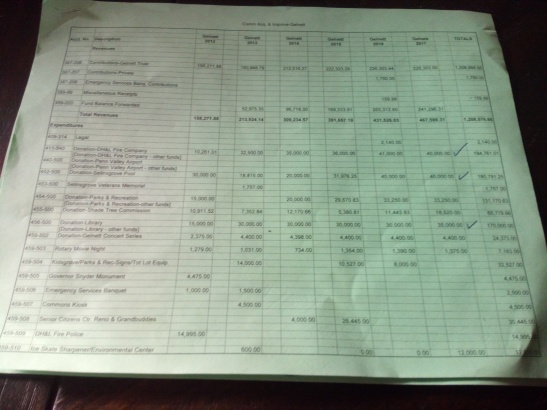 2 comments on “EXCLUSIVE: Gelnett Will Shows Funds May Not Have Been Used as Intended. Money Flows to DH&L Despite Cross Out. READ THE WILL”