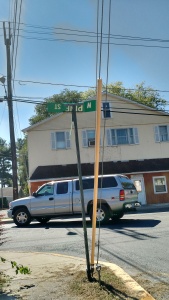 Better have a map.

A vandal broke the street sign on the corner of Pine and Orange Street in Selinsgrove early last week.

“It was probably some kids trying to be disruptive,” Mayor Jeff Reed told the Orange Street News.

The bent sign was bent upside down and broken. It was finally fixed by Monday.

Police are looking into it but still have no clues.

“It is an ongoing investigation,” according to the police.