The New Hampshire man charged with harassing a Susquehanna University student by posting “vulgar’ pictures and videos on an SU fraternity Facebook Page says he is innocent and only learned of the charges from reading the Orange Street News.

Police allege that Guy Wishart posted the private videos and pictures of his ex-girlfriend that were “meant only for him” on the internet on 3/12/17. The images were posted for the public to see on the Phi Mu Delta Facebook page, according to police.

“I have not contacted by any law enforcement from P.A. And any of these charges. As a matter of fact I would not know about them unless you reported the story, it got picked up by a NH Facebook news channel. Other wise I would know nothing about any of this. The main thing is I did not do any of the things I am accused of. I never had any videos of my ex!,” Wishart told the OSN.”

Wishart pointed the finger at a local man who attends Susquehanna University as the possible culprit.

“I had a bunch of missed calls from PA phone number and a bunch of calls from her ex that she left to go out with me. He goes to the frat that the video was posted to. Why are the police not looking at him?” Wishart told the OSN.

“At the end of the day if I did this I would own up to it and take what ever I had coming my way. I’m not a liar!  My ex and I had a very bad break up because of her lying. I loved her so much and it was almost love at first sight. She would say the same. Now that we hate each other. It really sucks!” added Wishart.

Wishart was charged with several crimes including harassment, according to the complaint.

“Victim stated that her ex-boyfriend put private video of her on Facebook. Victim stated that Wishert was the only person she sent the video and was very clear that it was intended for him only. sudps Weirich handed me thumb drive where the two photos where the two photos of video was posted to phi mu Delta Facebook page. Victim continued to say that Wishart has been texting her father who is located in New Hampshire volger messages and also creating Facebook account using her name and trying to speak with her friends,” the complaint read.

“Victim stated Wishart also created a Tinder account which is a dating app and receiving text messages from males. Victim stated that she has never created anything from Tinder but that she believes that Wishart is then providing the males that like her Tinder account her cell number. Victim has also stated she has had males show up to her dorm room through the dating app,” read the criminal complaint. 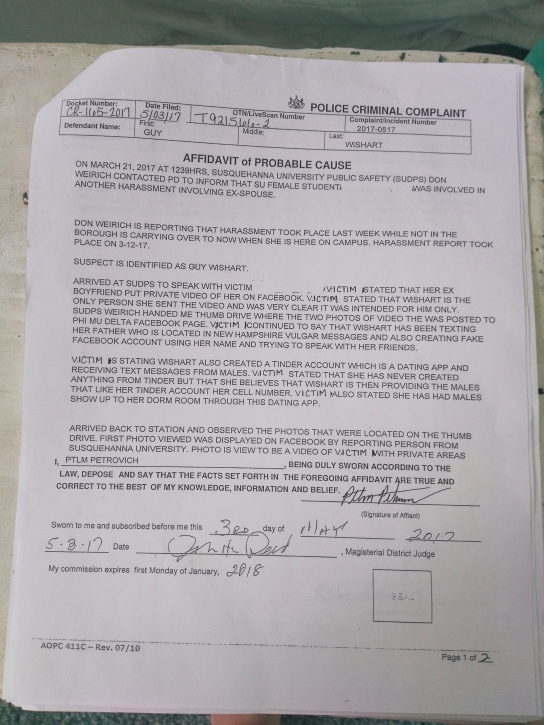