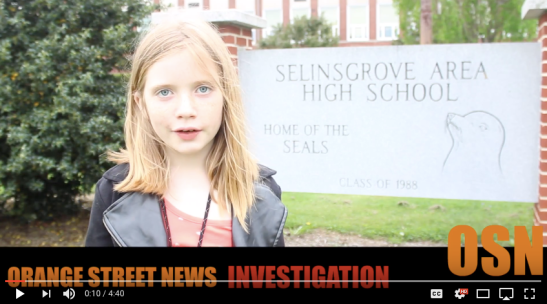 Multiple sources inside the Selinsgrove High School have told the Orange Street News that a student led-protest over the dress code is planned for later today.

Students have told the OSN that they believe the dress-code is overly restrictive and isn’t applied equally to male and female students.

“There is a total double-standard,” one female student told the OSN. “A teacher had me lift my arms and when I did a tiny part of my stomach showed. I’ve never seen them (teachers) ask a guy to do that. But they do it to the girls all the time.”

“I either had to go wear a nurses smock or go home, but luckily I had a sweat shirt I could wear over it,” added the student.

It is unclear how many students will be participating.

One parent contacted the OSN to support how the school has been enforcing the dress code.

“I have always felt uniforms should come into play… These girls want to play the discrimination card but they are the ones who pushed the limits by showing off everything they got,” the parent told the OSN.

Selinsgrove Super Chad Cohrs told the OSN that it isn’t the dress code that has changed — but the styles and that teachers enforce it fairly.

“The dress code has been the same for several years and has not changed.  It is certainly not overly restrictive.  It does not however, always coincide with the latest fashion trends.  It is enforced equally,” Cohrs told the OSN.

“Clothing that is sexually suggestive or obscene or that demeans another race, gender,
religion, national origin, or which promotes hatred towards any group, is prohibited.
The torso, or trunk, of the human body must be covered during the school day. As a
result, see-through shirts, shirts without appropriate undergarments, shirts that are low-
cut or exposing (front, side, or back), spaghetti-strapped shirts, halter tops, and tube tops
are all prohibited. Also, any top that is skintight or allows the midriff, cleavage, or
undergarments to be exposed is prohibited.
The length of shirts/tops must exceed the belt line.
No inappropriate holes in either shirts or pants.
Shorts, skirts, slits, and skorts must be of appropriate length. The administration will
make the final determination of appropriate length; the general guide will be that the
length of these garments should exceed the length of the longest finger when the arms are fully extended, or extend at least to mid-thigh.
Head coverings are prohibited. The exception to this is head wear required by religious
or cultural requirements.
Clothing, jewelry, or book bags advertising or promoting drugs, alcohol, gang
affiliation, violence, or unlawful activity is prohibited.
Safe footwear must be worn at all times.
Jewelry that is dangerous to the wearer or to others (included but not limited to spiked
wristbands, body piercing chains, etc.) is prohibited.
Undergarments must not be visible.
Wallet chains must be less than 12 inches and not unnecessarily heavy.
Students who are deemed in violation of the dress code will be asked to change
immediately. If alternate clothing is unable to be provided quickly, the school will have
three options: (1) provide clothing such as sweatshirts and jogging pants, (2) have the
student sit in ISS room if available, or (3) send the student home. Persistent violators
could receive disciplinary action.”