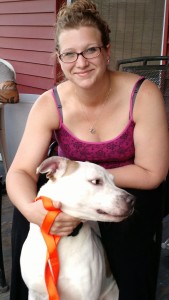 By Hilde Kate Lysiak
Talk about taking a bite out of crime!
An Orange Street Bandit tried to break into a house on Orange Street, but was scared away by a heroic dog, according to the resident.
“I was sleeping in the middle of the night when I heard Zeus barking at about three o’clock in the morning,” Melissa told the Orange Street News in an exclusive interview.
“I was scared, but was able to fall back to sleep. When I woke up the screen was punched out,” Melissa added.
Melissa said she doesn’t know why anyone would have wanted to break into her home, but they are probably fortunate that they didn’t make it inside or they could wound up a tasty snack for the protective dog.
“Who knows what would have happened if Zeus wasn’t around. He’s my hero.”
Selinsgrove police are still on the look out for the Orange Street Bandit.Anyone with information on the case is asked to call the Selinsgrove Police at 570-374-8655 with information.