Father: Injury to Baby was Accident

Richard Wagner, the Selinsgrove man charged with the assault of a baby, claims the newborn’s injury was an accident.

“He said that after she said she wanted a divorce he took his ring off his left finger and threw it in her direction. He said when she flinched from the incoming ring, she struck his son’s face off the table causing the injuries,” read the Affidavit of Probable Cause.

However, the government doesn’t believe Wagner. They say the injury to the baby’s eye was caused by Wagner’s ring.

“The defendant did during a verbal argument with his wife, he did throw a ring at his wife who was holding the victim in her arms. The ring struck the victim on the left eye: causing injury to the victim’s eye and area around eye,” the criminal complaint read.

Wagner is charged with Aggravated Assault, Simple Assault and Recklessly Endangering Another Person.

The baby was transported to Evangelical Hospital and is expected to make a complete recovery, according to sources.

The OSN is not saying the name of the wife or the baby.

The OSN is trying to get Wagner’s side of the story. No one answered the door at Wagner’s apartment.

In September Wagner was profiled by a local paper after the Greater Susquehanna Valley United Way had him speak at a fundraiser as a young teen father who received help.

A hearing will be held Monday, November 28th at 3pm at District Court. Wagner is charged with Aggravated Assault, Simple Assault and Recklessly Endangering Another Person. 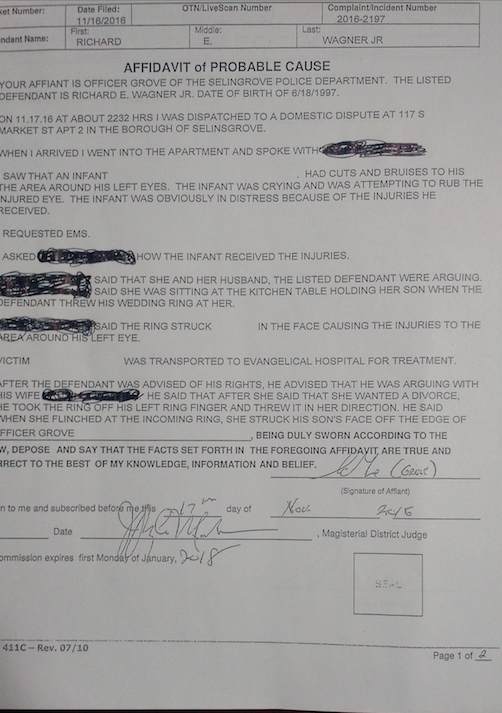 5 comments on “Father: Injury to Baby was Accident”