The Borough Council is reviewing an auditor general’s report that revealed several laws were broken by the Dauntless Hook and Ladder as it is still not clear if the borough will agree to continue funding the volunteer fire company.

Asked if the borough would be withholding funds, Borough President Paul Williams only told the Orange Street News in an email that board members had a report and, “It is under review at this time. The report was not discussed during the public meeting.”

After seeing the same report Penn Township decided to withhold nearly $80,000 in donated funds until they see a full financial statement, sources told the OSN.

According to the report, the rule breaking include:

The firefighters involved in the rule breaking “didn’t even get a slap on the wrist,” according to sources.

The OSN has been exclusively reporting on the rule breaking for several weeks now, much of which was revealed at a private meeting in February.

“Members found invoices that were marked as purchases for the race track,” the source tells the OSN.

One fire fighter “was observed putting fuel into gas cans and five gallon buckets, and even told the members that saw him, that he was taking it to the race track,” according to sources.

The Fire Company refused to allow OSN to attend the meeting — claiming it was “not public.”

The Fire Company’s account is set up to automatically be a tax exempt account because it’s a non profit organization (Scroll down to see form). The race track is not tax exempt. But the OSN has discovered that several members of the Fire Company have money ties to the Selinsgrove Speedway. 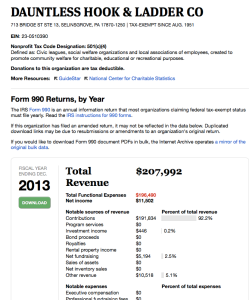 After the OSN broke the story, DH&L Fire Company Chief Brandon Ulrich told the OSN that the information should have never gone public. “This is a internal investigation that should never have been leaked out and will be handled accordingly.”

Last week Chief Ulrich told the OSN he will be releasing a statement. The OSN will publish that statement in full.

Have any tips? Please contact the OSN at hildelysiak@gmail.com