A Selinsgrove man was charged with Animal Neglect after his pit-bull “Beauty” was allegedly found with scaring on his head and bloody ears, on 09/19/17.

Police claim that they found Philip Coleman Varney’s dog “Beauty” on East Blackberry Alley “scratching vigorously” and “bloody.” Police took the two-year old dog to Companion Animal Hospital where a vet described “Beauty” as having several problems including: being “under weight” and a having  “2-3 inch old L shaped laceration on left ear which had become infected and swollen,” according to the criminal complaint.

A neighbor interviewed by the OSN said that she has witnessed the abuse first hand and was disgusted by the treatment of the dog.

“I’ve called the police several times because of his dogs,” she told the OSN. “(The way he treats his dogs is) painful to watch.”

The neighbor said she never witnessed physical abuse but said the dog isn’t given food or water.

But Varney allegedly told police that the female Pit-bull had been stolen from him by a neighbor who “wanted it.”

“Varney advised he wished to report his pit-bull being Female White and reddish brown in color was stolen in the earlier hours on 09/20/2017. Varney advised XXXX stole the dog from him. Varney advised the Pit-Bull was familiar/friendly with XXXX and XXXXX wanted it,” read the criminal complaint.

Police claim that when they investigated Varney’s house they found “no food or water in a small wood/metal wire cage with three adult pitbulls inside,” according to the criminal complaint.

Abel Varney, who answered the door at the Varney’s home, told the Orange Street News he didn’t know if the dog was abused but did know that Philip Varney loved animals.

But when asked if Varney abused his dogs, Abel Varney answered “I’m not sure.”

“He loved his dogs,” added Varney. 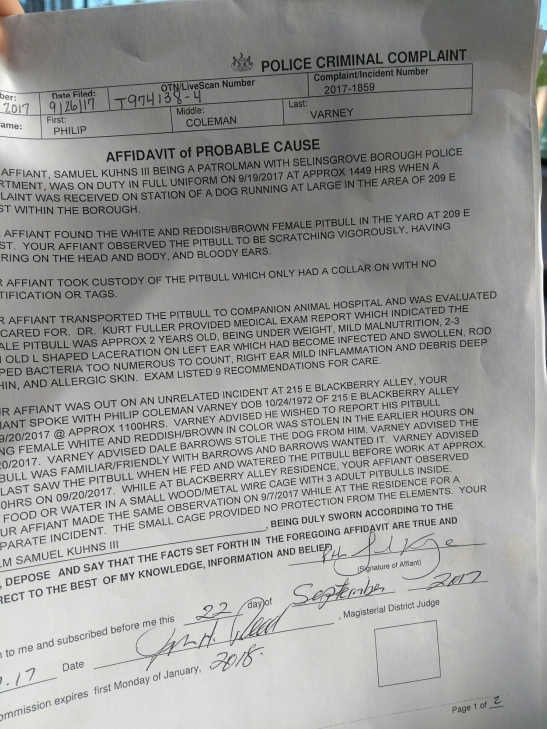