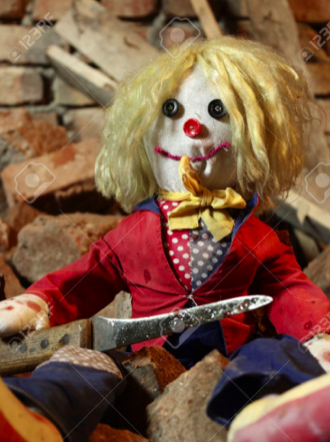 By Hilde Kate Lysiak
11/30/2017
“The reason we are living, the reason we are all here, is because of an object—a powerful object…her,” 16-year old Amy said, pointing to the large life sized doll that was propped up against the table.
The room full of 10-year olds gasped in shock.
Suddenly, the doll’s arm moved up and everyone let out a shriek.  The doll was coming to life!
Amy started laughing.  “You are such wimps,” she said.
Amy let go of a clear string she had in her hand that was attached to the doll.
The room full of 10-year olds relaxed, feeling stupid for being fooled so easily by a doll and a string. But one of the 10-year olds, a fiesty girl named Tina, turned to Amy, a look of anger flashed in her eyes.
“We will get you back for this,” she said.
Amy laughed out loud. “Sure you will!” she exclaimed. “But why don’t you worry about growing out of your diapers first, loser.”
Two Months Later
Amy stood with the room full of ten-year olds. They were staring at the same doll, except this time, one of them was missing from the group.
They were mourning over the loss of their friend, Tina.
“Do you remember that day?  Tina was so mad at you,” ten-year old Lacy said to Amy.
“Who knew that would be the last time we would see her?” Amy replied.
“NO!!” a voice yelled out.
The voice had come from outside the room. Everyone turned to look. It was Officer Garland. He was the one in charge of investigating Tina’s disappearance.
“We are reopening the investigation,” the girls overheard the officer say as he walked in to the room with Tina’s mom.
Officer Garland turned in the direction of Amy. “Can I have a word with you?” he asked.
Amy’s face turned cherry red.
“I-I-I-I already told you everything I know,” Amy stuttered.
“Not with you…with her” the officer said, pointing behind her at the doll.
“You want to talk to the doll?” replied Amy. She was confused.
The officer rubbed his eyes.  The doll winked.  He rubbed his eyes again then ran out the door. Tina’s mom followed him.
“What was that all about?” asked Lacy.
The rest of the girls shrugged their shoulders.
“I have an idea,” said Amy.
A pair of scissors had been found next to the doll the night Tina went missing.  That was the only lead they had.  Everyone secretly believed they would never see Tina again.  No one admitted it, though.
Amy pulled out a ouija board from underneath the table that the doll was sitting on then turned to the rest of the girls.
“If Tina is dead, maybe we can talk to her this way,” she said.
Ten minutes of asking questions passed and nothing happened.
Suddenly, the doll started shaking.  Everyone screamed.
It’s doll hands began ripping at its own doll face, pulling its fabric off.
“Help!” screamed Amy.
Amy was so scared she felt warm pee flowing down her leg. She tried to run out, but was so scared she slipped on her own pee and fell over the rest of the girls.
The doll had lifted itself off the table and had begun walking with the scissors in her hand. Coming closer.
And closer.
Finally the doll was standing over Amy.
It lifted the doll scissors above it’s doll head.
Amy was crying. “Please no! Please!!! I’m sorry!!”
The doll plunged the scissors downward, cutting the rest of the doll skin off of its doll face.
The girls all let out a gast of shock when they saw what was underneath the doll skin. It wasn’t doll fluff or doll foam. It was human.
It was Tina. And she had a big smile on her face as she turned to Amy.
“Did I scare you?” she asked.