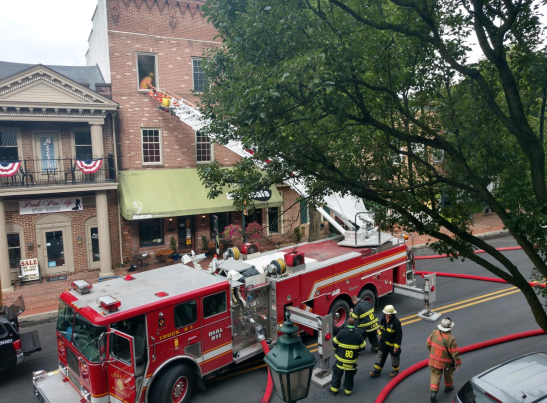 A man escaped danger after being alerted by his two dogs that a fire had broken out in his third floor apartment above the Kind Café on N. Market Street in Selinsgrove.
The fire broke out shortly after 9:00am at Selinsgrove resident Josh Nengle’s apartment above 16 N Market Street.
Fortunately for Dengle, his two dogs let him know something was wrong. By the time the barking of his dogs had gotten him out of bed quick-arriving firefighters were already at his door.
“My dogs barking woke me up, then they [fire fighters] told me to get out. After they told me to get out I grabbed my dogs and went,”Nengle, told the Orange Street News.
Nengle also lives with his kids and fiancé along with his two dogs. His fiancée was at work, and his kids were at school. Nengle said he didn’t know how the fire started.
Kind Cafe owner, Davide Della Pietra told the Orange Street News that the fire spread fast.
“It was on the third floor, not the Kind Cafe, it was a small fire that got [big] pretty quickly,” owner Pietra told the Orange Street News.
(PHOTOS BY BJ KIRKPATRICK) 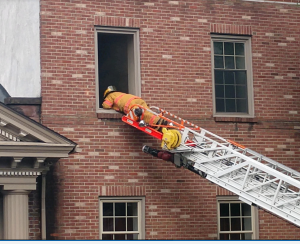 Market Street was shut down and broken glass was on the sidewalk. The bright lights and sirens filled the morning air as six emergency vehicles, along with many fire fighters and first responders raced to the scene.
On the street, Kind Cafe employees handed out cookies to first responders.
The Kind Café sustained no damage and is open for business, according to the owner.
Asked where the displaced family would go next, the family didn’t have an answer.
“We will just have to see,” Nengle’s Mom told the Orange Street News.
If any one has more information concerning the fire, please contact the Orange Street  News, at hildelysiak@gmail.com, or 570-259-9874. 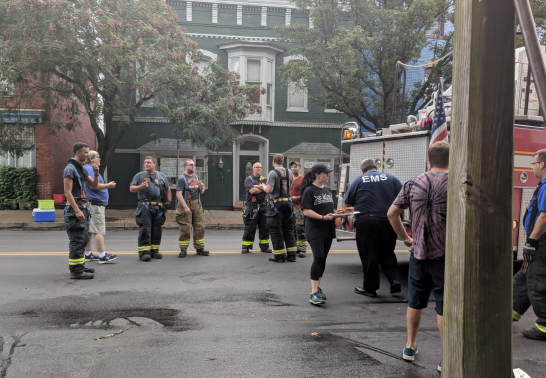 2 comments on “EXCLUSIVE No Injuries After Apartment Fire Above Kind Café. Dogs Warn Owner of Danger”