A Selinsgrove woman was allegedly shoeless and drunk when she smashed her vehicle into a parked car at the intersection of South Water Street and Walnut in Selinsgrove on December 16th, according to police.

Katherine Blann, 47, was found “with no shoes on” and “bleeding from the mouth area” after crashing her blue Chevrolet into the legally parked car.  The emergency workers claim it was obvious that Blann had too much to drink, according to police.

“Blann was looking for information inside vehicle and when approached asked Blann for driver’s license and handed your affiant credit card. Blann was scattering through papers and handed your affiant appropriate documents. Blann went inside ambulance. Your affiant detected strong odor of alcoholic beverage emunating from Blann. Blann was taken to UPMC Susquehanna Sunbury Hospital for mouth injury,” read the criminal complaint.

Blann’s blood alcohol was tested at the hospital and discovered to be .202, according to police. The legal limit in PA is .08.

Blann made local headlines almost 30 months ago after she became the victim of a hit-and-run while crossing the street after leaving a bar in Selinsgrove on June 12th, 2015. In an exclusive interview with the OSN, Blann spoke of her injuries and pleaded for the person who hit her to come forward.

The OSN reached out to Blann to get her side of the story but hasn’t heard back by the time of publication.

Blann was charged with Operating a Vehicle Under the Influence and Careless Driving. A hearing is scheduled for 1/30 at 11:15 am at 1025 us Rt. 522 in Selinsgrove. 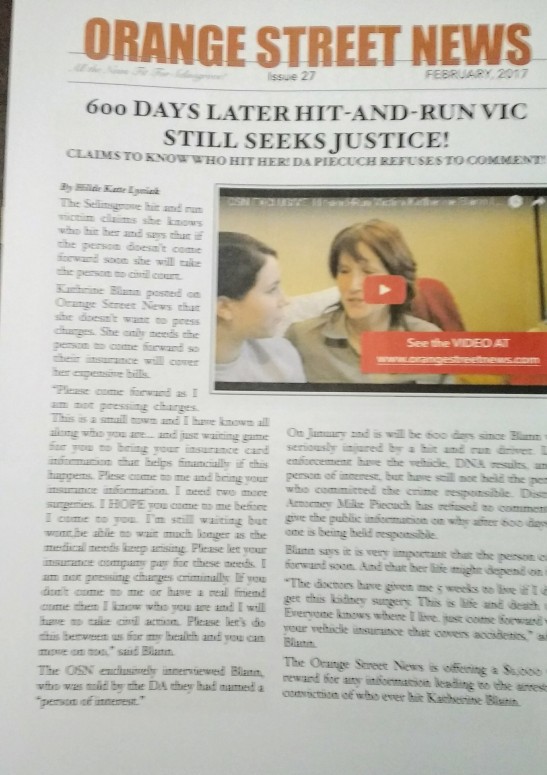 One comment on “Grove Woman Allegedly Smashes into Parked Car, Charged with Driving Under Influence”